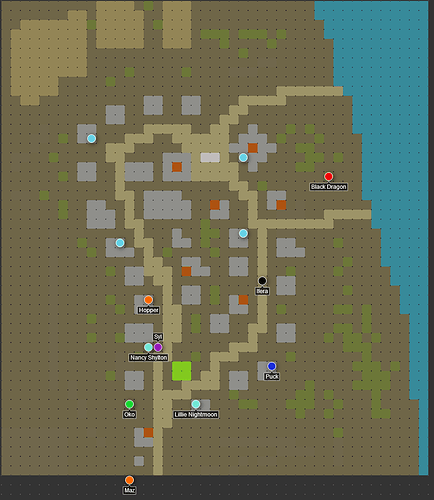 Just gonna say this right now that I absolutely love Shmeppy. I struggled when we first switched to playing digitally for the pandemic. I usually use a whiteboard (often not even a battlemap) just to give everyone a sense of where they’re out. Theater of the mind and all that, my descriptions provide what the players need, but a rough visualization of space helps, all the bells and whistles of other programs, I find to be distracting. I actually saw an Instagram ad, I think and I never looked back at Roll 20 or other programs.

Last session was this, a bandit group sacked the town and the party went to search for survivors. Unfortunately, a dragon is laying claim to the town to loot (they’re scavengers in my setting, circling dead towns and to ‘mark’ them and claim the loot for themselves). The players had to sneak around, search the houses, and escort survivors. It went swimmingly, using squares as 10ft (ish) and each ‘round’ being a minute I just ran it like a normal combat.

Prepping this in another program would have taken forever, time I needed to plan a pretty unusual session (there were random complications between ‘rounds’ and different events to make things more than just ‘roll stealth every round’)

I am struggling a bit with next session, which involves a lot of units. Being able to select multiple tokens would be nice but I’m working with ‘clumps’ of larger tokens for the time being.

During a massive combat one time I used the token name to keep track of numbers. The blue token named 5 had 5 baddies. The blue token 9 had 9 baddies. I slightly increased the size of the token to differentiate it from single player tokens. It worked pretty good. It was a bit finicky to rename the token from 5 to 4 to 3 as the unit was wiped out. Players avoided larger tokens with a big number or ranged them and ran away. Smaller units were ambushed.

It was a good balance of OCD and fun.