Eyedropper is "too accurate"?

I’m not sure if this is really a bug, intentional, or just a side effect of how the eye dropper works, but it is very literal in its interpretation of what color you’re selecting. Since I’m color blind, slight variations in colors don’t always look so different to me… so I use the eye dropper to make sure I’m getting the same colors again if I’ve overwritten them on my palette. What I didn’t notice is that the color that the eyedropper selects is influenced when Fog of War is on the cell. I thought I was selecting #07a03 when I used the eyedropper on a fogged cell (assuming it was eye-dropping the tile color), but instead I got #097003. In this case they look different enough to me, but it would be easy for me to mistake them without noticing, particularly if I started Filling with it on a part of the map away from like-colored cells.

I made a little screenshot to try to show what I mean. I’m not sure if it’s a bug or not, but it was definitely unexpected behavior for me. I didn’t think it would give me the ‘shaded’ color of the Fogged cell, but instead expected the color that the cell was filled with. It also selects an even darker shade if you eyedrop the cloud directly or the white outline of the cloud. 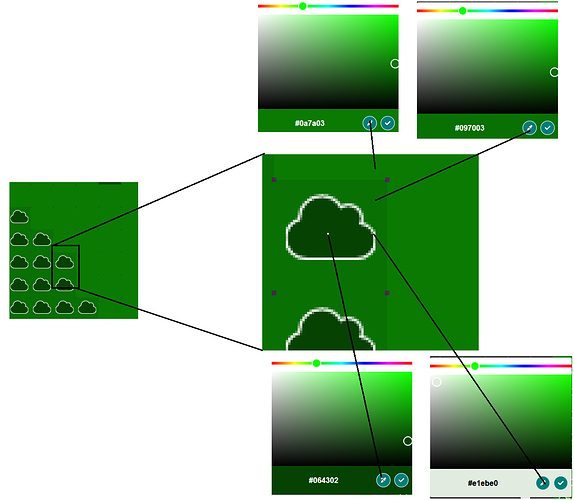 Very well-written bug report, thank you for writing this up.

This is working as designed (the eye dropper just selects the color that’s on the screen, nothing more complicated than that) but it doesn’t mean it’s not a bug. I didn’t consider the implications of the slightly darkened fog-of-war cells, especially for folks who have difficulty differentiating colors.

I’m not quite sure what to do about this yet, because I think the general principal of selecting whatever color is there is probably sound. Other options would be challenging to make consistent and predictable I think.

I could imagine a little “zoomed-in-view” helping a bit, but probably not dramatically. Tricky. I’ll have to think on this.

Had this thought while falling asleep just now… figured I’d write it down. Apologies if this is sleepy nonsense.

I could detect whether I’m over any part of a token, or any part of an edge, and then finally any part of a cell (which is always true so this is the fallback). Then get the color used to draw that item. This’d make it so your always sampling the same colors you used… which seems like the desired behavior honestly, even if it might be a little surprising (I might expect the currently existing behavior for example, but I’d probably pick up what this other behavior is fairly easily).

What you mention in your second reply makes the most logical sense to me. I assumed the eyedropper would only return colors that I had used on the map as either an Fill, Edge, or Token… and I don’t intuitively consider Fog of War to be a method of changing the color of something. I’m thinking of it like a mask that goes over it, but the color underneath is still the same.