Small idea for a feature - special fills that can be applied to a square. Lines - Horiztonal, vertical, both diagonals.
It could be an offshoot of the Fill tool, like Fill (Special)? The color selected would then fill only the interior lines portion.

I do this on wet erase maps to indicate things like difficult terrain, hash marks for outside the “playable” area, or to shade different things. A lot of that functionality is already possible thanks to the filling of cells with different colors, but some inter-cell texturing/lines could also add another level.

A bare bones version of this might have the line color be only black or white.

Here’s a mock up of what I’m thinking: 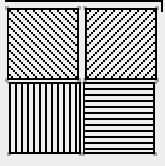 I think this is trying to solve a problem that’s certainly on my mind with my “named regions” concept… I still haven’t gone and fleshed out that idea, but I want to provide a tool to help specify map features like difficult terrain, moveable spell effects, doorways, etc.

You can do all this with the fill/edge/token tools and various colors, and folks have found some neat ways to do it (which I absolutely love and I think speaks to the flexibility of Shmeppy) but I think there’s room for another super-flexible tool.

We’ll see though… I’m basically thinking of a fill tool that lets you create a moveable and labelable region on the map. There are some seriously difficult pieces of this tool’s interface that I need to simplify though: like expanding a named region will be difficult to differentiate from creating a new named region.