Okay, so this is more show and tell than my last debrief - everything Shmepp side went well, so I don’t really have any feedback that hasn’t been mentioned elsewhere.

Not really a super pretty map, but here is the past few games map. 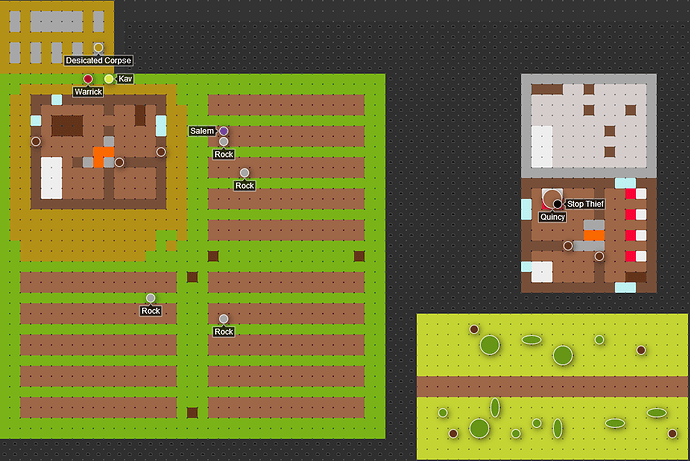 I had my players running through and clear out a farm they got the deed to a few sessions ago and it seem to go fine. Something we ended up talking about after was that recently encounters have tended to be more based around open spaces. That’s probably do to the fact that, unlike a wet erase mat, Shemppy has an infinite area, so it’s easier and more tempting to scale up. So that’s something I’m going to need to consider a bit more when building encounters and designing maps.

Looks great! Are those green tokens trees and bushes? I like the look of that…though for a moment I thought you had multiple characters named Rock.

I know what you mean re: encounters in open spaces, although encounters in my games have very often tended to be set in large-scale areas. Which meant that I have always had issues trying to make things work on my physical wet-erase mat at home because it was never big enough, or the scale was off because I had to say 1 square = 10 feet instead of 5 feet and then everyone got confused. Shmeppy’s allowed me to do the same things I’ve always done, but with a lot less complications!

Thanks! And, yeah, their bushes. Seemed like a good way to represent them on the map. As for all the rocks, well I’d originally tagged all of them as they were part of a mini puzzle - it’s a good way to let players know what they can and can’t interact with, I’ve found - but it would not surprise me if the party ended up doing something that resulted in an army of characters named Rock following them around.

I’ve done the 1 square = 10 ft, and it normally doesn’t go well - usually I just scale up the map if I’m able to. While I didn’t run many large encounter spaces before switching to online, I did tend to run a lot of longer dungeons, so those could take up a lot of space. To get around the scale issue, I just had 4 medium to giant wet erase mats so I could section things.