Showerthought: letters instead of icons

I’ve seen a lot of feature requests mentioning icons for tokens, or just generally the ability to add some complexity to the map (freeform drawing), which clashes with Shmeppy’s simplicity, but fulfills a very common need.

I immediately thought of roguelikes like NetHack and the way they represent items (actually, everything) with ASCII characters: 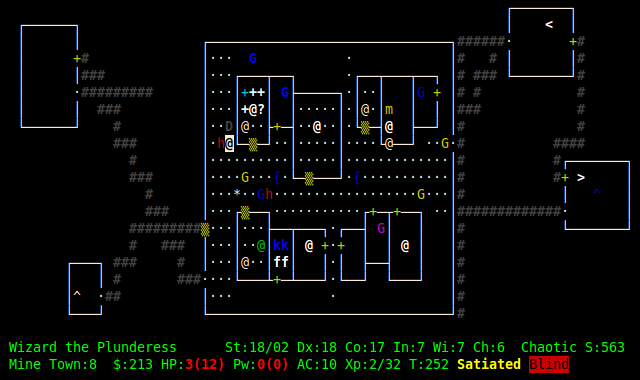 So my suggestion (not actually a feature request, just a showerthought I wanted to share) would be the ability to write one character per cell and/or token, so you could represent an ascending ladder with ^, a descending ladder with v, a stash of gold with $, etc. It would even allow Unicode (and Emoji!?) if the GM wants it (via their OS char picker, so it wouldn’t make Shmeppy any more complex).

Adding a character directly to a cell has never been suggested before (I think…) and I haven’t thought of it myself. Thank you for this! I worry about its user-friendliness (for non-terminal users) but I’ll have to keep turning it over in my mind for awhile. I don’t have a great sense for it.

(Also I love nethack! Very cool to see you reference it

Oh, yes! I love this! Or even to have a single letter or number show up in the token itself (or alternately just 2-3 shape options (triangle, circle, square). Not every brain can sort things by colours (I have ADHD and some other co-morbids) and have a hard time sorting various visual stimuli. My brain reads all the tokens as being the same, because they’re all circles, even if they’re different colours. Having just one other super simple different way to visual represent tokens would increase the accessibility for those who aren’t neurotypical.