I’ve been tracking a simpler metric recently. Just “GMs connected during game activity” (where game activity is any modification to a map, like a moving a token, or filing some cells).

Take a look at this graph. For each day, it shows the number of GMs who were connected to an active game in the last 7 days. It breaks those GMs down further based on how many hours they spent connected during game activity.

I think this graph shows a fairly stable population of users, with a slow bleed of people leaving the platform and not getting replaced. The number of users using Shmeppy for more than an hour each week seems particularly consistent, with a fairly slow decline.

I’m not content with a decline of users (obviously) but I have plans that I think will let me move my growth rate into an upward slope. For example:

do you have any idea how these metrics compare to player retention on other platforms?

i would imagine as lockdown gets lifted in many regions, attrition would be similar across all similar apps (i might be biased because i love shmeppy, but id think your retention has been better than others’ due to the fact that it’s still freely available and an excellent product)

I wish I knew

. I asked the other VTT devs on /r/VTT about metrics awhile ago, but didn’t really get much in the way of concrete answers.

@johncs that moderation topic you started got me thinking, do you have any metrics around forum usage? User activity, response rates, anything of interest?

I do. This forum is an instance of Discourse, so I get lots of goodies for free (though the platform is big on “civilized discourse” so I’ve tried to strip this instance of much of its “civil” nudges/messaging because I think “civil discourse” is nonsense).

I don’t really dive into the forum metrics much though, since I don’t have growth goals around the forum specifically. Here’s a screenshot of the summary of the metrics though if your interested: 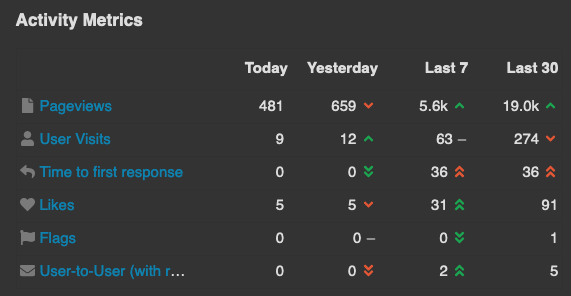 I should mention that those page views are mostly from crawlers, the user visits is the better metric. Topic views that you see as a user filter out crawlers, but my metrics on this page do not (they show them as a separate category in the non-summary parts of this metrics dashboard though).

I’d be curious to see if the uptick around April-May was primarily driven by ad spend or if it was more organic than that.

It seems like the downward trend is driven mostly by the <1 hour, 12+ hours, and 24+ hours. Maybe the <1 hour users are the top-of-funnel users, just starting out or trying out Schmeppy for the first time.

I’m not sure about the 12+ hours and 24+ hours though. I think you’re controlling for folks who just have a Schmeppy tab open in the background. Maybe there’s some initial testing and drawing from newcomers that later get more efficient with their maps. Or maybe newcomers tend to make a bunch of content up front and spend less time in the weeks that follow creating on the maps.

But I’d be most curious about the factors that would drive the uptick in April-May. If it is ad spend, I would wonder how sustainable it is to have constant ad spend to maintain a healthy growth rate.

Good questions, I’ve got actual answers to a couple of them. But I’m thinking about pretty similar things as well.

I’d be curious to see if the uptick around April-May was primarily driven by ad spend or if it was more organic than that.

There’s been a constant ad spend throughout the time this graph covers. $5 a day on Reddit ads.

So I think the uptick was just word-of-mouth and people entering the VTT market who’d maybe heard of Shmeppy but hadn’t needed it before. Reddit was blowing up with “what are some good VTTs threads?” and Shmeppy was recommended a fair amount.

I kinda wish it was ad spend

, then I’d be somewhat confident I could reproduce it. As it is, I’m not sure what it would cost to buy a spike in users like that.

I’m not sure about the 12+ hours and 24+ hours though. I think you’re controlling for folks who just have a Schmeppy tab open in the background.

I’m controlling for people with Shmeppy tabs in the background by only counting time around “activity”: when an edit has been made to the map. I think each edit creates a 30-minute window centered around the edit (so 15 minutes into the future and 15 minutes into the past).

Maybe the April May uptick was due to Covid social patterns. Gamers realized they were not heading back to their table in a few weeks. This may be when the VTT searches started in earnest.

Yeah, I can see the fact that there seems to have been a lot of organic growth as a positive, but the uncertainty around the ability to use levers to encourage that growth in the future that could also seem like a conundrum.

I do think the user growth rate is the probably the most important business metric at this point, particularly the new users, or folks who try it out for the first time. Kind of like any startup, really.

I think if we assume the product is solid, if there is a healthy stream of new folks trying the product, consistently over time, they’ll hopefully balance out or outpace the attrition over time.

Not sure if you’ve taken a close look at some of the “what are some good VTTs threads?”, but maybe there is some correlation with the posting activity or other engagement with the thread and the uptick (or waning growth) of new users on Schmeppy. Just thinking about verifying the theory on the uptick in April/May.

Are you able to do some experiments with the ad spend (like up it or decrease it at various times to see what the traction is)? Can you also tweak the kinds of folks who are targeted by the ads? Maybe the experiments can give a rough sense for the hypothetical return for every dollar spent on ads.

Some other business-y ways that it seems folks use to try to recreate growth online that isn’t about ads: