Tokens don’t look very good when you stack them on top of each other.

The whole interface feels very cludgy to me. Fortunately, most tabletop RPGs don’t involve stacking entities on top of eachother very often, so I don’t think this wart in Shmeppy’s interface really bugs too many people. Even so, I’d like to figure out a better interface.

My current “best idea” is to improve the way Shmeppy says “there’s more than one token here.” I think a good way to do this will be to draw the top few tokens in the stack slightly offset from eachother so you can see a hint of other tokens underneath.

Then, when a user hovers over the stack with the token tool selected, a tooltip will appear that says simply “5 tokens” or “11 tokens” or “3 tokens” or however many are in the stack.

This won’t be convenient if people are dealing with large stacks of tokens, because the only way to get to the 6th item in the stack is to take off the 5 tokens above it first but it’s fairly simple to implement and I think it should satisfy most people.

We came across this when we were playing the Curse of Stradh campaign. Something that I thought might work in some situations was having it so that the text wouldn’t appear on top of other text. So if the tokens were named Bob, Sue, etc. Maybe Bob would show up on the bottom, then Sue would show up 90 degrees to the left, and so on.

This might cause other issues though if there are a lot of other tokens around the board. There were times when the tokens weren’t stacked and it was still an issue with the UI because there were a lot of tokens right next to each other blocking the names of other tokens.

Another potential solution that has other issues is making it so that the text automatically tries to have its own space. So a piece of text might jut out and have a line that goes from the name to the token. I think of Microsoft Excel and how if I were to make a pie chart with one section that is really small, the software will automatically put the text off someplace and draw a line from that text to the section. This doesn’t always look great though.

Or maybe another solution that will help: what if when all the tokens were stacked, you could hover over the stack and get a dropdown menu of the names of all the pieces that are stacked there? And then you could click on the one you want to interact with and it will bring that token to the top of the stack so you wouldn’t have to unstack and restack the tokens.

This might cause other issues though if there are a lot of other tokens around the board. There were times when the tokens weren’t stacked and it was still an issue with the UI because there were a lot of tokens right next to each other blocking the names of other tokens.

Been working on this recently: 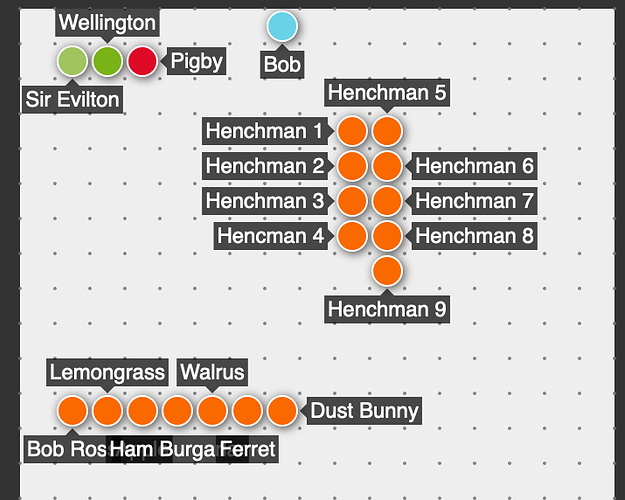 Should be landing soonish, but there’s like a million-and-a-half details to iron out and I just started a couple days ago.

Or maybe another solution that will help: what if when all the tokens were stacked, you could hover over the stack and get a dropdown menu of the names of all the pieces that are stacked there?

This seems like it might be the best solution… It’s at least the most powerful. Since tokens often don’t have labels I’m not sure this is even the clear-cut best.

Quite the tricky problem.

With this new fancy label positioning I’m adding, it might be possible to add some little marker in the label itself that says conveys “3 additional tokens in this stack”.

One idea that’s come to mind is having the option to hide token names until hovered over. This way if you have them stacked it could reveal all the names and maybe even allow you to move tokens further down the stack by clicking and dragging the name of the token you want. I don’t know how possible that is, but it’s my best idea.

I had the same idea and actually implemented it in Shmeppy. After playtesting with it a bit I decided not to release it though. It ends up being kinda sucky to not be able to see the labels without mousing over.

Maybe alternatively hiding the full stack list of names? Like only showing the topmost until hovered over. That’s one other way to do that, but I don’t know how realistic that is.

That’s basically the current situation, except that there’s no way to expand the list of tokens that are hidden. I plan on eventually making it easier to see (and select) tokens underneath the stack by doing something similar to what your describing. But I think the current situation is pretty good for now, and I’m well set up to make small iterative improvements over time.