I’ve not seen this mentioned before, but one of our DMs figured out this trick: 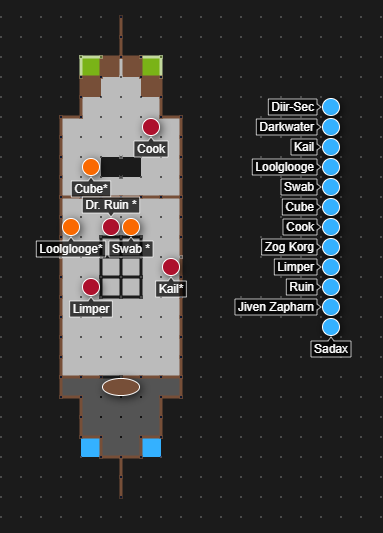 The column on the right is an initiative tracker, the fight on the pirate ship (now concluded with many dead and removed) on the left.

The stars in the names indicate a condition marker.

Not a huge thing, but a nifty “feature” that kind of emerged organically for us.

It’s a great idea! Lots of neat ways to get more out of a simple toolset, one of the many things I love about Shmeppy

There was another post on here a while ago with similar thoughts from someone named Kitt, but it was a ways back. Maybe these can be merged?

[image] I came up with an idea for tracking initiative order using tokens. Not sure why it hadn’t occurred to me before, but since I use standard repeating initiative, makes sense for it to be very visible to the players so they can prepare rather than it being in a notebook of mine and I have to call them out. Also, I was able to concoct this seaside dock map in just a few minutes with Shmeppy! Gives so much more flavor to what’s happening.