Title says all. Namely a DM tool, I don’t see PCs getting too much use out of it.
Say you’re doing an encounter with a mob of enemies, or at least, several enemies with the same initiative (group encounters). Instead of moving each individually when they’re all moving the same direction, you press, say, shift + right-click, drag a box over all the tokens, and that “selects” them all, allowing you to move them all, keeping the same formation in the box.
This is probably a niche, first world problem, but it’s something I’d like to see.

Definitely, this is the highest priority thing in my mind. A multi-select tool that allows moving multiple tokens, but also parts of the map (cause if you’re one square off with your map making right now, and you’ve run out of room for that other room, you’re just boned…)

Being able to move or copy/paste parts of the map would be amazing, especially for similarly sized rooms. Makes me wonder if there could be a “rotate” as part of that copy/paste as well, but any copy/paste would still be great even in isolation.

Haha quite the coincidence that you just posted in this thread. Take a look at what I’ve just started working on as of about 15 minutes ago: 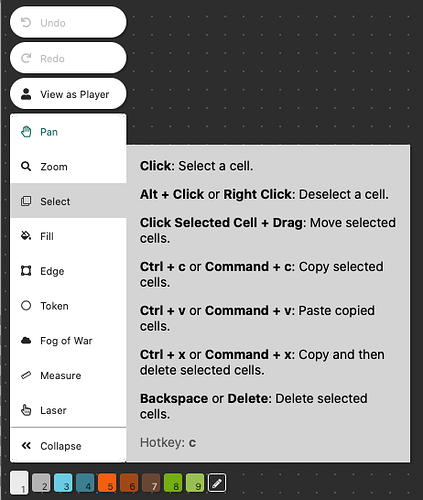 Rotate would be rad but I don’t think I’ll try to tackle that right now.

Will this select tokens as well? So cool.

Yup, you’ll be able to choose which “layers” you want to move. You can see the design I’m toying with starting to take shape in this screenshot:

There will be much rejoicing, and reusing. Side question, how many hours does a change like this represent? You are doing design, backend and user interface.

Haha interesting question. I’m not really sure to be honest.

A ton of high-level design happens way before implementation. Lots of thinking and talking about the problems with folks. Even came up with this checkbox idea forever ago.

I’m hoping it’ll only be like 2-3 weeks to have this in front of users but the number of hours I’m actually coding each day really varies. I work as much as I’m able to.

Since it seems interesting, here’re the “macros” I came up with on Friday. I break these down into micros when I start on them, which are 15 minute tasks. I’m pretty far into that third macro right now.