I was wondering if there is a reason why the player fog of war is the same as the base background. Is there a reason the players can’t see the same fog/cloud icon that the DM sees? I often have my players ask me if they are seeing everything (b/c of fog of war) or if that is just the background. If you are the kind of DM who only fogs out exactly the rooms and features they draw then this wouldn’t work, but I think most people fog off and reveal in big chunks.

My thought was that DMs might not want players to know what’s been explicitly hidden. Maybe a good compromise would be to show that a cell is covered by Fog of War to a player if it’s bordering at least one visible non-empty cell

I could also just have players see all of the Fog of War that’s been put down… I’m interested to hear what other folks think about this. It’s not clear to me what’s best, but I have seen lots of workarounds people are using to deal with the fact that Fog of War isn’t visible to players. So I’m pretty sure that the current behavior isn’t very good.

I agree that you wouldn’t want players to see exactly what is hidden, but my experiance is that most DMs use the fog more like this: 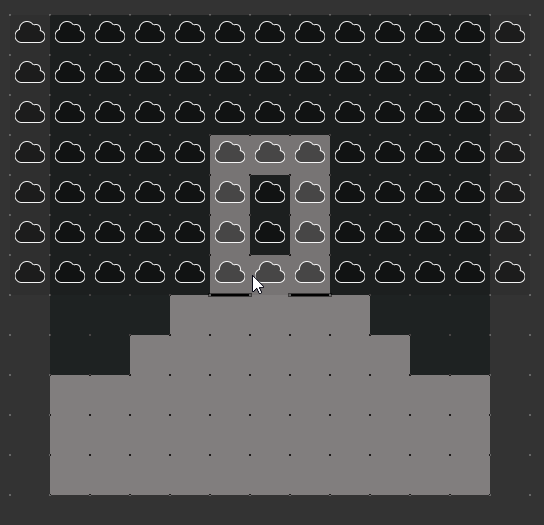 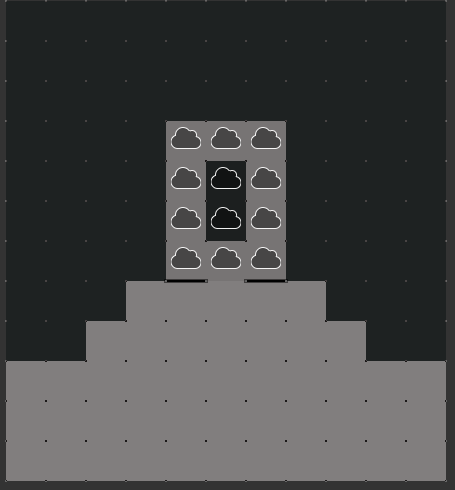 I could be totally wrong about this, so I too would be interested in learning how most DMs use the fog of war. The solution might also be in not changing fog of war, but in changing how “empty” is shown…? I’m not sure what that exactly would mean, but I’ll think about it.

I’ve encountered something similar, but for me, I use FOW to only outline what is hidden since it’s gotta be a big computing problem if too much is hidden. I was going to suggest maybe if we could change the background base color instead of the dark grey.

I’ve been doing a sea-based campaign and have FOW over islands makes it hard not to see oh there is a special island there to my PCs like in this. 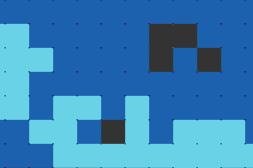 But I honestly think FOW is a personal thing. I’ve used the big chunk and only outlined methods and found which worked best for me.

I have become quite comfortable with FOW as it is. Having FOW show differently to players would require having to put FOW over the entire map all the time. An “exposed to players” FOW could worsen the FOW no surprise problem. The angry janitor and box of ammo are completely hidden from the players. The angry fish in the water is NOT hidden because of FOW. Exposing FOW to players as FOW could make this problem worse. 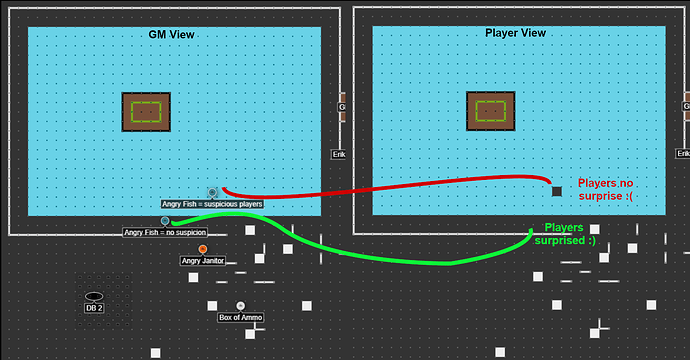 I avoid FOW accidental reveals by placing tokens off the fill and edges like the Angry Fish = no suspicion.

The beauty of the present FOW is its simplicity. Would this mean there would be different FOW for tokens, or fills, or jpeg backgrounds? Do we want switches that make FOW different for different styles? It may get complicated. If I want complicated, I go to FVTT.

I agree to some extent to the suspicion part @Misterque, but my problem is what if i want to just show the whole area in one color and then clear FOW. it might just be a style of using it I guess. I think (different than action because I don’t know to code) but maybe @johncs we could have a bit more of a prompt when making a new map that could ask what the background color could be? Honestly, dont know how much more difficult that would be.

This would also help down the line if there were ever hexagonal maps as well since the determination for the map happens at its creation.

How does fill compare to different backgrounds? LIke could a giant fill work the same as a differently coloured background? Would a FOW token be useful? Like a token that only shows on the GM screen.

I would like to know how much this would change the look and feel though. Do the fills become hexagons? Where do edges go on hexagons? I have no idea.

@Misterque
I don’t know how a token might work? Like for me sometimes I use tokens for text that I don’t want to forget but not show my players like a trap or something. And since I’m a glutton for punishment I make huge maps so Id love a token that’s like FOW for that reason.

I do also adore hexagons. and my idea is that when you click new map a prompt or box pops up and you can choose like square or hexagon and from a range of base colors choose a background. For example for a sea-based campaign you can use deep blue but in contrast for a dwarf town deep in the mountains use a deep brown or shade of grey? I’d honestly love to how to code to help out cause making this tool seems amazing! @johncs any thoughts?

I also use a similar system to @Misterque, but I’d like to dig up this old thread which discussed “levels” of FOW for the purpose of hiding the contents of a room without hiding the room itself, like “already explored” territory in an RTS.

I think there is always going to be a big pull in fog of war between the TYPES of DMs more than anything else. I use Shmeppy pretty much only for dungeons crawls and combat. In combat, you don’t really need fog of war too often, plus its easy to just drag tokens off to the side as needed when you are dealing with a relatively “simple” situation. In dungeons I like to make them ahead of time and then just fog off the entire dungeon in one big block. As players explore the rooms and hallways I un-fog those individual parts. Obviously we are in a dungeon so everything is a little suspicious, so even though players occasionally ask “is there something there, is a a wall or just the empty map, etc…?” I don’t find it to be a big problem. If there is hidden stuff like a lever, door, or hiding person, I simply don’t put them on the map.

But for DMs who like to use more social situations, or exploration situations where there is meant to be lots of hidden things, or things the players could only see from certain angles, etc… they (probably) aren’t doing just a blanket reveal of the entire area at once.

The idea of showing only a cell covered if it is in contact with at least one ‘discovered’ cell is (to my eyes) intuitive and that is something good. The problem of mistaking FoW for ‘not map’ would then become a more or less a non-problem. It is all in all an elegant solution.

Another option would be to show the cells (neighbouring at least one covered cell) as semi-covered/shaded, giving a hint rather than just a ‘clear cut’. Maybe just aesthetic otoh.

(Or maybe giving an affordance for ‘explore or keep away’ depending on context/mood. Personally I love the feeling of PC:s slowly edging forward in fear of what might pop up and chase their souls into eternity. A semi-covered evil wrongdoer can be seen as shaded - has he (because all evil wrongdoers are men, we know that) seen the PC? (“Gaaah! It is coming right for us!!!”) Or can the PC quietly edge back again to plan for expression of righteous violence with his fellow rightdoers?!! (duh-duh-duuuuh!!!). This would be the substitute for placing tokens ‘halfway’ into a cell on the IRL wet erase to simulate the same phenomena.

Or maybe it is just bells and whistles =)

Another option might be simply to have both options. One hides something completely, for secret rooms/corridors, and one shows the players the FOW icon, for undiscovered rooms/regions that are “on the map” but haven’t been discovered by the players.

(I’ve only toyed around with Schmeppy so far.)

My personal prerogative would be making sure DMs can hide from players even the general shape of the map, because Schmeppy is actually the first tool I’ve used that does that. With explicit FoW you’d have to FoW out very large areas in order to accomplish this. I think it’s also iffy in terms of visual aesthetics.

So I’d prefer the idea from johncs and monkiBonki to only mark the FoW cells that border visible cells. If I understand @Dyllbert’s use case correctly—that the problem is players not being able to tell walls apart from the limit of a range of vision—then this should work for them, too.

Although I’ve never encountered it, I think customizing the background color like bilboswaggins mentioned is also a fairly compelling use case relative to what I’m imagining wouldn’t be that difficult of an implementation.