This has been requested a few times by different users. In the past it’s struck me as not being in line with Shmeppy’s ideals, since users often ask for it in order to add more fidelity to Shmeppy’s maps which is not what Shmeppy is about. But Edg4rAllanBro on Reddit recently wrote:

My DM draws basic squiggly shapes to represent flora like bushes or trees for example. While it’s more accurate to draw a shape where each cell that is a bush is demarcated specifically, I feel it would be easier to just make a squiggle to represent natural shapes, both for the players to understand and for the DM to quickly make.

Which made me think that there might be an implementation of the freehand drawing tool that would work well with Shmeppy.

Any of ya’ll have thoughts?

Honestly I think this is a good idea

I believe something for drawing very quickly (ie, squiggles as described above) would make sense. The point wouldn’t be to create a high fidelity map - but it would be nice to be able to e.g. indicate “there is a stair here”.

It would, however, destroy some of the aesthetic of the map - currently, it is extremely clean (due to the full snap) and it would become less clean with squiggles.

I have an idea for this space that might work well (and also solve your diagonal problem): Have the squiggle work as a search into an extremely limited icon library. My immediate thought to icons would be:

Treat each of the shapes similar to a token, in that you can assign color to them separate from the background. This would have them have three colors:

Having the ability to throw down some quick lines to represent things like stair directions and squiggly polygons for natural stuff would be nice to see, particularly as an alternative to using tokens as a method of marking points of interest that would be better done visually.

Adding this feature would allow me to use Shmeppy in my games. I love the simplicity of adding and moving tokens around, and the tile-based mapping is helpful for some situations in my games, but, 9 times out of 10, I just want to draw a big circle or rough rectangle and say, “Here you are, at the south edge of the cavern. There’s a giant pit here (another rough circle) in the middle…” stuff like that. I’m having trouble finding exactly what I want, and, aside from the freehand drawings, Shmeppy is coming super close to being it.

I would like to chime in and add support to this idea. Being able to draw freehand in multiple colors would make it easier to distinguish one object from another, especially when adding things on the fly.

one of my close friends and current GM introduced me to shmeppy and i started using it for large scale maps. i came into the forums to comment on this potentially being a feature as well as another that might be similar: free handing the edges similarly to to the fill squares so that i can drag my mouse and have a rough sketch of what i want the room or landmass to look like instead of or in addition to the straight line tool. it might be an alt+drag feature in the edge tool?

Could this support tablet/stylus use? It would be a very unique feature if possible.

The answer is: yes, a possibility for simple, freehand doodling tool is a good idea, both for the schmeppy concept in general as well as productivity/creativity. A set of icons are also possible though complicated. A combination of the two would be an abhorrence. Below is explained why.

Taking it from an angle of psychology and linguistics, long and fancy words that actually boils down to: I see something from top view, a squiggly blob filled with green colour (perception). I associate it directly with what it represents, without having to read or figure something out - a tree. (association, representation, intuitive design, cognitive load/strain)

The goal: With as little information (like in data) as possible the sender (gm) should invoke the idea/representation the sender has, as close as possible in the receiver (player). This falls into the concept of schmeppy if you ask me: simplicity. Less ‘fuzz’, attention won’t wander around, it is down-to-business from the first moment when eyes are laid on the scene. Just as schmeppy is to a large extent today.

If I prep a scene and want to do a tree or shrubbery in schmeppy today I find that scale forces me to use alot of squares, hence making large overview maps unwieldy. I also use 2-3 shades of green and fiddle around w borders for the player to understand that it is a shrubbery or tree without having to ask what it is. Still, the player says it took quite a while to figure out. If I have to mark it up with a token the work is actually forfeit, but also the representation of the ‘world’ that the map is, limps. Some things are written, some things intuitive, some things takes explicit figuring out (reasoning) - different dimensions increase the constant cognitive strain. In other words: fuzz and attention stealing features is introduced and the receiver spends more cognitive effort on understanding the map rather than putting that effort into playing. A small, freehand, green doodle eliminates this. A small diversion from the graphic representation concept of schmeppy makes a grand increase in the basic tenet of simplicity.

There are two middle roads though
1 - diagonal borders for mimicking ‘round’ shapes. This will cut back the scaling issue considerably
2 - set up a battery of ‘icons/symbols’. For example a scale-to-size ‘tree-icon’ and a ‘shrubbery-icon’ that can be plotted overlapping to mimic a hedge.

The icon solution takes a lot of effort designing icons making them intuitive and scalable. From an on-the-fly map creating perspective the freehand is always faster. Both? Now complexity really takes off and schmeppy is lost.

Huge yes from me. Freehand drawing is the one issue that keeps me from switching to Shmeppy. Right now, I think Shmeppy has an “inverse painted duck” problem to extend your terminology - given the limited drawing tools I have, is it possible for my players to understand without explanation or label that what I drew was, in fact, a duck?

Would anyone guess “duck” from that without my prompting?

There is a limit to verisimilitude of course, but if my tooling is pushing that amount of work on me to explain the world, I’m better suited by just doing complete theatre of the mind accompanied by an abstract “pointcrawl” map instead of anything on the map.

Freehand drawing may well result in partially filled squares, but that equates to what I do on real-world wet-erase maps as well when I need curved walls.

is it possible for my players to understand without explanation or label that what I drew was, in fact, a duck?

I do expect players to need explanation of what’s in front of them for basically all Shmeppy maps. This is a trade-off that I’ve accepted in order to achieve Shmeppy’s goals.

For me I could definitely use a free hand but first i would love a just half filled tile tool for the paint. so i could only fill in half each square. its hard for me sometimes with a room on a slant to fully see everything easily and not have it overly bulky.

I would love a drawing feature. it would definitely make the system feel “complete”. Though if its too clunky, I wouldnt be sad to know you tried and it didnt work to your standards.

Hello! I love the simplicity of Shmeppy, it’s great. However, in my opinion, you can’t be a “wet-erase mat” without freehand drawing capabilities. The term heavily implies, in my mind, the experience of being able to just draw lines wherever you feel like, and then erase them easily. Drawing all the little grid line borders is time-consuming, and the end result badly represents the organic nature of caves and other such environments. It wouldn’t need to be anything that interacts with the grid, it would just be like a background image that you draw/erase on.

The lack of a freehand tool is basically the only thing keeping me from using Shmeppy right now. My previous method of simple map-making was just using Inkscape and doodling lines over a grid, but obviously that’s not interactable by the players, and screen-sharing can be clunky at times. With a freehand tool (and a background image tool, which is already planned), Shmeppy would be everything I need, and I’d definitely be willing to pay for it.

One of my attractions to Shmeppy is the absence of freehand and background images. One could easily not use them if they were incorporated, of course.

I used minis and erasable ink on tabletops for 30 years. I really appreciate the benefits of freehand drawing. For a long time, there was nothing else. Freehand online is completely different. I am terrible at freehand online. In retrospect, I was probably equally terrible at tabletop freehand. The absence of freehand and background images is a blessing to me.

Shmeppy is not a mapping tool. It is the fastest and easiest shared drawing tool. The tokens, edges and fills are integrated in a way that quickly makes sense. A freehand option on top of edges and fills would mess up FOW and token interaction. I feel the same way about background images.

PS I would love to have freehand to convey the layouts of machines, artifacts, and aliens. I realize that is not Shmeppy’s role.

As I said, I’m not asking for anything that is somehow aligned with the grid, and I’d be totally fine with it being a layer similar to a background image. I also realize that the edge/fill tools and the freehand tool would be more or less mutually exclusive, they don’t really work together. I don’t really see a problem with that, I think that Shmeppy can be simple, modern and feature-rich all at the same time.

To be totally frank, strict grid alignment is not particularly important to me, anyways. Heck, I would also enjoy the ability to disable grid snapping for tokens. I’d just like a virtual wet-erase mat where I can draw some lines, plop down some tokens, and measure the distances between them. Just so everyone understands where I’m coming from, this is the setup I used for a while: 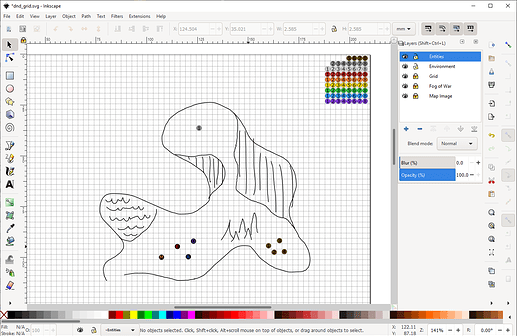 If it were easier to share, had measuring tools, and was a bit less clunky, I’d still be using Inkscape. All that’s missing for me from Shmeppy is the ability to doodle simple maps like I did in that picture.

Are you screen sharing over Zoom? I could see you system working with that. We use screen share with Zoom all the time. Sometimes we drop down to audio only if bandwidth is a problem.

Over Discord, but yeah, just screen sharing. My group is audio-only.