Fun fact about Fog of War in Shmeppy

I posted this in Dynamic Fog Of War but ended up accidently derailing that thread, so I’m splitting it off onto this thread instead.

Fun fact from long ago: I initially planned for Shmeppy to never implement fog of war at all. You don’t have fog of war on a wet-erase mat, why have it in Shmeppy? I figured if users wanted fog of war, it was probably because Shmeppy’s drawing tools weren’t intuitive-feeling enough.

I’m actually still unsure about whether it was a good decision to include Fog of War in Shmeppy. It’s certainly caused problems: it’s the slowest part of the rendering pipeline; it’s required a lot of supportive work (like “view as player” is pretty much just a supportive feature for Fog of War); it encourages people to draw huge maps in Shmeppy which has required a ton of work to support better; it’s probably the least-intuitive part of Shmeppy’s interface (players dropping tokens into Fog of War is an unpleasant experience); and there’s more downsides…

hard to know what’s best sometimes. Every new feature has such far-reaching consequences.

You don’t have fog of war on a wet-erase mat, why have it in Shmeppy?

Counterpoint: the fog of war feature is exactly why I plan to continue using Shmeppy with my group even after we’re all back at the table. In fact I would love to see it expanded to support something like different “levels” as suggested here. Being able to “shade” a room so the players can’t see what tokens are in it would be helpful for both role-playing and combat encounters.

You don’t have fog of war on a wet-erase mat, why have it in Shmeppy?

I disagree, kind of. When I do paper maps (2’ x3’ 1" on “easel” pads), I frequently use pieces of cardboard to simulate line of sight or perhaps better put, persistence of memory for the players.

My players have had no problems adapting to the fog of war, as implemented. It’s honestly one of the best features of schmeppy. For us “view as player” is a killer feature.

IDK if a dynamic fog is necessary, but the pain of a player dropping a token into the fog is all too real.

Is the fix worth the pain though? Ideally, players should be able to see their tokens regardless. That however means you need to make player tokens different from others and that leads to more special cases…

I’m not sure the complications that requires are better than the simplicity we now have.

I also agree with others posting here about the FOW features. I don’t see a need to implement dynamic FOW, but the existing FOW feature is one of the reasons I use Shmeppy exclusively now. This is not the topic of the initial post, but a counterargument to your points about FOW in general.

Shmeppy’s existing FOW allows me to fully construct an encounter location beforehand so that I can focus on token placement, spells effects, and terrain changes all using simple coloration of the map. IMO, the relative simplicity of FOW in Shmeppy is one of its strongest features.

Fog of War is absolutely a useful feature, and don’t worry, it’s not going away. I’m just idly wondering about what might’ve been.

The reason I was hesitant to add Fog of War initially is that Shmeppy was solely focused on allowing users to build maps during a game. Adding Fog of War made it viable for users to also build maps before a game.

So now Shmeppy has two major use-cases to worry about, and they both require love and attention. If I instead focused solely on the one use case, it might be served even better than it is right now.

But Shmeppy’s user base would be quite a bit smaller. Focus comes at a cost.

I used fog of war in real time tonight. I laid down a patch of fog and built a big robot token underneath it. This allowed the “fresh idea” to be constructed on the sly and popped out at the most theatrical moment.

Fog Of War is useful because Shmeppy doesn’t have multi layered tables to work on, so instead of having to open multiple different Shmeppy tables I can just ‘uncover’ the other map I want to use.

Also I have Fog Of War on a wet erase map at my meatspace games: 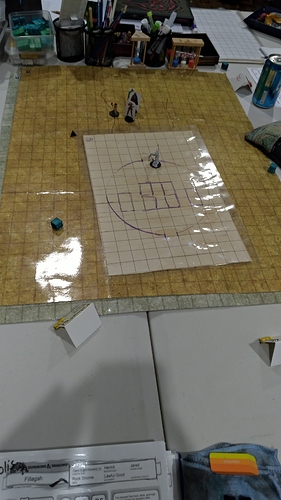 We use other sheets/paper/books or whatever to hide parts of the map before players enter it. Sometimes we even have ‘false rooms’ for illusions or whatnot. The way that the Fog Of War currently works is very nice- and yes please do not put dynamic fog revelation into the game if you can avoid it.