So, as I expand my footprint into virtual D&D, I try to prep what I can in the various tools I use, Shmeppy being one of them. I have created several maps so far, mostly for different areas and importantly, by the colors saved to the palette for working on that map (as noted in other feature requests).

When it’s time for us to move to a new map/location, I message all of my players in discord to load up the new map in their browsers, and after 30 seconds or so we’re all good to go. It’s not a major hurdle. Before the game, I pin the URL of the map where we start for the night.

But, it got me thinking about the concept of “Game” not being equal to “Map”. If as a DM I managed the room, and specifically which map was loaded at a given time, players wouldn’t need to get a new URL to change maps. I could switch the map that’s loaded (what we now call “Games”, while players stayed In the same “Game” or “Room”.) Its really that different thinking about “what is a game” and how it ties in to the player experience.

This could also be an enabler toward other features; such as the saved color palette and a “token tray” which crosses games that I saw in another posts.

Not really a fully fledged feature request, but just some thoughts I had.

I’ve had a few people ask about this sort of thing. I remember @Kitt (forever ago) suggested a little wormhole button that just threw everyone in the current map into another map (honestly I probably like this idea better than any other I/others have thought of so far, but it still seems lacking).

@KraftHP and I were hashing out some designs around this the other day over Discord. It ends up being fairly tricky…

The main problem I see is that for a lot of users (especially first-time Shmeppy users) the concept of a game/campaign/party/what-have-you that’s separate from a map isn’t useful. A lot of Shmeppy users use it as a white-board of sorts, and there’s no other maps that need to be referenced.

So I’d really like a solution that’s implicitly managed: users don’t have to do anything special to get the benefits. Unfortunately I haven’t figured out any solution that satisfies this (though Kitt’s solution is fairly implicit, no decisions shoved at users until it’s time to actually use the feature for its intended purpose, which is why I like it).

@KraftHP and I came up with some good ideas for an explicitly managed interface I think. I’m not sure if they’ve done any more thinking on it, but I felt like all the ideas we explored while we were talking all added too much complexity that gets shoved at users immediately.

I also noticed that the solution I liked the best was hardly any more powerful than a Google Doc with a bunch of links in it… So wouldn’t I just suggest users do that?

I’m glad you’ve made this thread, I’d love to hear folks’ input on this. Because I do not have a solution and I’ve thought about it a fair amount (Kitt’s comment was probably 2 years ago now, so I’ve been idly wondering about this feature for about that long).

To be fair, their is a lot of power in being able to stay within one tool as opposed to having to jump between multiple. Tabbing in and out of a session to switch maps my not take a lot of time, but it does eventually add up.

It seems like something like new map button at the bottom of the screen near the color palette might work well, like an excel sheet. If someone wanted to load up shmeppy as a quick white board and not think about grouping this map into a full campaign or scenario they could, but if someone wanted to prep a couple larger maps of a multistory building and not have to send out new links for each level they could do that as well.

I had worked up something similar to this. I know I need to flesh it out more, but it was my first pass.
I agree, I was thinking something like this would be a nice to have as well, and could eventually lead into possibly having pre-built map packs and such that others could make and share. 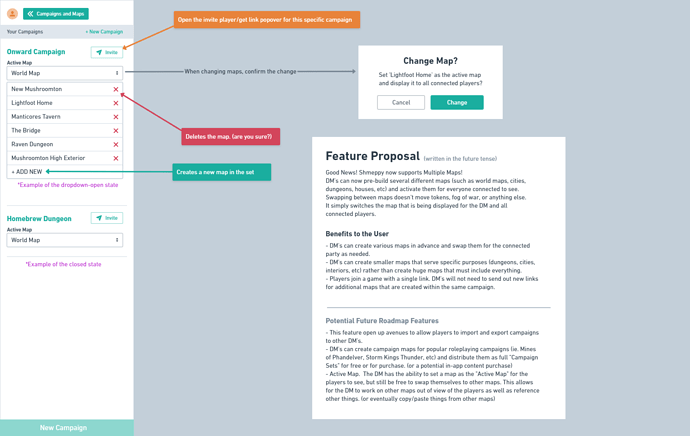