The three traits of Shmeppy's design

If you’re considering submitting a feature request, I encourage you to read through this post. Whether or not your feature is implemented is determined (mostly) by how well it aligns with the traits laid out here.

The Disconnect in the World of Virtual Tabletops

Most virtual tabletops try to provide a “high-detail visual experience,” ie: they expect GMs to build (or use) detailed maps and tokens.

This doesn’t match up with most of the in-person games I’ve been in where I’ve mostly used wet-erase mats and abstract (or mismatched) tokens instead: 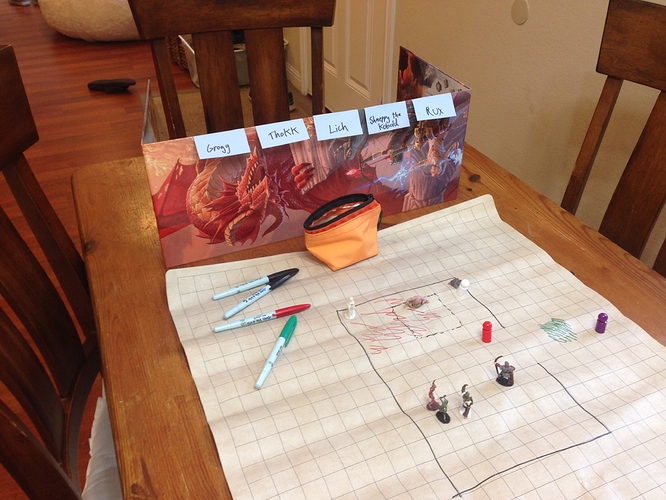 I think this disconnect is why many groups who’ve brought their games online end up playing without any maps or imagery. They tried to bring their game as-they-play-it online and were instead encouraged to substantially change how they play.

Shmeppy tries to fix this disconnect and stay authentic to the wet-erase mat experience.

This is easier said than done. Most GMs don’t have a stylus so Shmeppy can’t just provide a shared MS Paint-like drawing surface and call it a day. Instead I’ve had to think about the important traits of a wet-erase mat and build a tool that has those same traits. I’ve come up with three.

Both wet-erase mats and Shmeppy’s drawing surface have these three traits:

Let’s dive into each of them.

This is the most important trait.

Some play styles aren’t even supported without this, in particular: improvised games where the GM doesn’t know where the players will be and draws the maps during the session.

Getting started takes moments, even if you've never used it

This is the second most important trait.

Tabletop gaming online should be easily accessible. Not reserved to those who’re willing to spend hours reading tutorial content.

Most virtual tabletops do not satisfy this. There’s hours of tutorial content for all of the most popular solutions out there. I think Shmeppy’s ease-of-use will be a serious competitive advantage.

You're encouraged to stay abstract: no fine details

This is the third most important trait.

Because of The Painted Duck Effect, accomplishing the first trait (quick drawing) is almost impossible without also accomplishing this trait. They are extricably tied together.

So this trait is not important on its own. If I could create a tool that lets users create high-detail maps without losing out on ease-of-use and speed (the first two traits), I would. But I can’t, therefore this trait is important.

Since I’ve started building Shmeppy I’ve received hundreds of feature requests and I’ve rejected or side-lined any feature that would compromise Shmeppy’s ability to satisfy these three traits. This has ended up being most features.

When a feature is in a gray area and doesn’t substantially compromise a trait and would be super useful to have, some careful thinking is required.

I’m looking forward to seeing ya’ll’s feature requests and thoughts in this forum, and I hope sharing these traits with ya’ll will help us talk about Shmeppy’s future in a way that feels good for everyone.

I’d love to hear your questions or thoughts about these traits, as well as how effectively I’ve presented them in this post.

From a more general perspective, having guidelines about how you think about the project and what direction you want to take it is a really helpful metric for deciding whether to accept or reject a feature request, and gives you a very clear way to communicate why you might not be including someone’s idea.

My thoughts on the specific traits themselves:

A lot of GMs who use similar tools are probably often hardcore power users, so I can imagine them wanting a lot of things that would not be user friendly.

I think this is probably the place where you’re going to get a bunch of feature requests and going to have to say no.

Yeah, I think so too. Most of the people I’ve talked to would probably place themselves in the “power user” category.

As far as I can tell every VTT I’ve seen is trying to design for that kind of user so I think they’re probably pretty well-served. If you wanna spend a lot of time with your tool you’ll probably have good luck with MapTool and Fantasy Grounds. Astral in particular feels Shmeppy-esque but with high-detail maps.

I don’t really wanna go head-to-head with every other VTT out there. My big bet with Shmeppy is that there’s a big market of non power users, or even “I may consider myself a power-user but hot damn I this speed and convenience is great sometimes.”

It really is a bet though… It’s gonna be harder to reach those non power users because they’re not the ones checking out new VTTs on the market. And I suspect power users are going to be both frustrated by Shmeppy and vocal about that frustration. It may be that I’m forced by market pressures to pivot and change up Shmeppy’s goals. I hope not though. We’ll see.

Edit: I wonder how much marketing/branding will help with this. Setting expectations that Shmeppy will not serve all of your needs if you have lots of needs, and may instead just totally nail a subset of your needs way better than anyone else, but could leave you wanting.

For me, the case for hi-res is really limited to importing a photo/image of an existing published map. That’s the one “map creation” area that would be a boon to me as my adventurers make it through Curse of Strahd.

I’m really appreciate how thoughtful you’ve been with this approach. I’m just starting my first online campaign, and I think this is really going to help. I didn’t have any interest in using the other systems out there, but I think this is exactly what I need.

A quick question about your design choice.
Why have you wanted to digitalise only the mat, and not the dice rolling? If you cannot keep all the rolls on the same webpage and instead need to be sat around a table with real dice, why not just use a real wet-erase?
Does it boil down to purely technical details, as having a live chat can be quite the hassle, or is there some underlying reasoning (ie. staying more focused on just the map)?

Shmeppy is run by one person (me) and I have limited time and resources. Every new problem I try to solve for my users is (essentially) another product I need to design, develop, and maintain. In this case, if I made a dice rolling feature, that would be time I’m not spending making Shmeppy’s wet erase product better.

The wet erase mat is the unique part of Shmeppy, the thing you can’t quite get anywhere else. Dice rolling is very easily solved by another product, so the value to users is much less. I’d rather spend my time on the higher value things.

Lastly: the feeling of simplicity and ease-of-use that Shmeppy gives off is not easy to create. Rejecting features that don’t fit perfectly within Shmeppy’s razor sharp focus is mostly how I’ve created that feeling. Every new button/action/feature is another element on the page, another thing a user has to become comfortable with.

If you’re looking for some dice rolling options, check out this doc. There’s a section for dice rollers.

I was reflecting on the “stay abstract” focus for Shmeppy. I do think staying abstract is a strength for the product. But I was also thinking that many folks out there are looking for very concrete tools for their games.

From what I’ve heard anecdotally from walking into game stores in the past, it seems the market for creating miniatures and things like that is a huge part of the their revenue. There might be a significant subset of dollars that go into making games more concrete for players in a visual/tactile sense. Maybe it’s like thinking about the sensing vs. intuiting experiences that players seek.

I’m don’t necessarily think Shmeppy should have more concrete features, like image import or texture choices or whatever. But keeping Shmeppy abstract would seem to be a choice that would play into the business side of things, like what type of gamers are targeted. And perhaps staying abstract and quick is a distinguishing characteristic that differentiates Shmeppy from other choices.

Thinking about the recent comment on this thread, I think it is a good question about why would someone choose Shmeppy over a wet-erase. I think one key feature of Shmeppy is the ability to save the maps, basically being able to store the playable map without erasing it. That seems like one key feature that a digital wet-erase map has versus a physical one.

Also, if the tools allow for quicker drawing time, like shape features or things like that and practical fog of war mechanics. Those seem to be some key qualities. Shmeppy already has these, but I think to the extent that these features outshine a wet erase board might be where the core value of the product lies.

I think it is a good question about why would someone choose Shmeppy over a wet-erase.

Oh I missed question the first time. I’d say that you shouldn’t choose Shmeppy over a wet-erase mat generally. Shmeppy is designed to help with online campaigns, where a wet-erase mat isn’t a viable option.

There’s definitely clear use-cases for using Shmeppy for in-person games (like the games we’ve played in with a big projector and lots of people), but if it’s a small party at a big table, a wet-erase mat seems like it’ll be better. I’d use a wet-erase mat myself anyways.

And perhaps staying abstract and quick is a distinguishing characteristic that differentiates Shmeppy from other choices.

This is exactly right. I’ve mentioned this to other people on the forum, but there’s a lot of virtual tabletop products out there. Like check out this doc that has a bunch listed out.

Strangely though, almost every other virtual tabletop besides Shmeppy is trying to allow realistic maps, with loads of features like dynamic lighting or whathaveyou. They’re trying to replace the diorama or a printed paper map of in-person games.

The choice to stay abstract and thus focus on speed and ease-of-use is what makes Shmeppy unique. Otherwise we’d be just another VTT trying to do the same thing but better.

Do you think it is always true that a wet-erase mat seems better for a small party at a big table?

I do think Shmeppy has benefits that a wet-erase wouldn’t have, like being able to save maps in the “vastness” of the VTT. Also to potentially create maps quicker than drawing on a big board. For the Stradh campaign, I think I would have preferred Shmeppy to the wet-erase board that we had.

Another thought I had about the business model of Shmeppy is that the revenue model seems destined for the subscription world. The kind where the product is providing an ongoing service of some sort. And I wonder what that ongoing service would be - the alternative would be that a user would just opt into a subscription whenever it suits their needs and then turn it off whenever they didn’t need it.

I think potentially managing the campaign maps can be a key feature. Like storing the maps on the VTT, so players can return to locations. The storage of that info seems to be potentially one nice feature of the service.